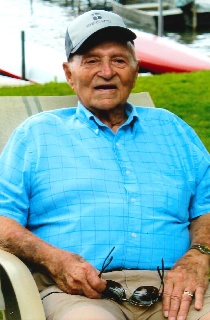 Allyn D. Schmitz, age 87, of Swanton, Ohio, entered into eternal rest, Friday evening, January 20, 2017 at Swanton Health Care & Retirement Center, surrounded by his loving family. He was born April 9, 1929 in Delta, Ohio to Albert and Rhea (McQuillen) Schmitz. He graduated from AI school and married Lillis Bartlett on June 26, 1948. Together they raised and loved 7 children.

Allyn was a man of many talents in his younger years. He farmed and then moved to become a plastering contractor, which led him to be the founder of Schmitz Construction. He developed several subdivisions in the Swanton area alongside his sons.

Besides love for his work, Allyn was a devoted husband, father, and grandfather. Being able to be a captain on grandpa's boat was a highlight for all the grandkids. Singing with grandpa on the player piano was always fun at the holidays. Sometimes he forgot the words and would make up his own lyrics.

Allyn and his late wife, Lillis, spent many winters in Sarasota, Florida on Siesta Key enjoying time with other snowbirds they became good friends with.

Allyn is preceded in death by his parents; his loving wife, Lillis; brother, Harold; sister, Mary and great-great grandson, Aiden.

Allyn's "larger than life personality" and his love for his family will be missed and will never be forgotten by his family and friend, Joyce.

Family and friends may visit Tuesday, January 24th from 2 to 8 p.m. at the Weigel Funeral Home in Swanton (419.826.2631). Visitation will continue Wednesday, January 25th from 10 a.m. to 11 a.m. at Trinity United Methodist Church, 210 N. Main St. in Swanton, where services will be held at 11:00 a.m. with Pastor J.T. Bean officiating. Interment will follow at Swanton Cemetery.

In lieu of flowers, memorial contributions may be made to Swanton Health Care & Retirement Center or Great Lakes Caring Hospice.

Visitation: Tuesday, January 24th from 2 to 8 pm at the Weigel Funeral Home in Swanton

To order memorial trees or send flowers to the family in memory of Allyn D. Schmitz, please visit our flower store.