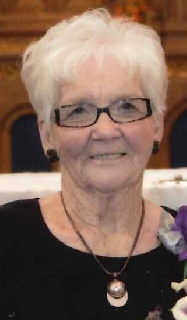 Betty Ann Ferrell, affectionately known as Nanny, age 82, of Greenwood, Indiana, passed away peacefully, surrounded by her loving family, Thursday afternoon, August 4, 2016, at her daughter's home in Sylvania, Ohio. Betty was born November 6, 1933 in Crossville, Tennessee to Ridley and Myrtle (Quarles) Patton. She was a 1952 graduate of Bedford High School, and on July 4, 1952 married William Ferrell. He preceded her in death on January 4, 1962.

Betty worked for the Greenwood City Schools in the cafeteria, as well as the Greenwood Police Department in the Juvenile Delinquent Division. She also took on the role as a house mom for students attending the University of Indianapolis.

Betty was a faithful member of Holy Trinity Catholic Church in Assumption. Betty thoroughly enjoyed all the domestic duties that come with being a homemaker, including cooking and baking, and she devoted her time taking care of her grandchildren and grandbabies.

Besides her husband, William, Betty was preceded in death by her parents and brothers, Fred, Douglas, Richard and Jerry Patton.

Family and friends may visit Sunday, August 7th from 4 to 8 p.m. at the Weigel Funeral Home, 413 E. Main St. in Metamora, OH (419.644.3601), where a Vigil service will be held at 7:30 p.m. Prayers will begin in the funeral home at 10:30 a.m. on Monday, August 8th, followed by a Mass of Resurrection at 11:00 a.m. at Holy Trinity Catholic Church in Assumption, with Fr. Michael Dandurand presiding. Interment will take place Tuesday, August 9th at 3:00 p.m. at Greenwood Cemetery in Greenwood, Indiana.

Memorial contributions may be made to Holy Trinity Catholic Church or Holy Trinity School, 2649 US 20, Swanton, OH 43558.

Visitation: Sunday, August 7th from 4 to 8 pm at the Weigel Funeral Home in Metamora, Ohio

Mass of Resurrection: Monday, August 8th at 11:00 am at Holy Trinity Catholic Church in Assumption

To order memorial trees or send flowers to the family in memory of Betty Ann Ferrell, please visit our flower store.