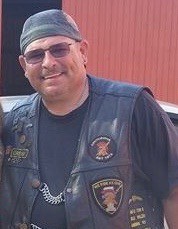 Crew worked for the Chrysler Corporation and was to retire October 19th.  He was a member of the UAW and the Centurion Motorcycle Club.  Crew loved riding his Harley and hanging out with family and friends.

Crew was preceded in death by his parents and his late wife, Cynthia Smith.

To order memorial trees or send flowers to the family in memory of David "Crew" Smith, please visit our flower store.