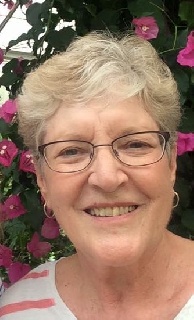 Dianne K. Baxter, age 72, of Adrian, Michigan, passed away in her home on Friday morning, August 25, 2017. Prior to her retirement she had worked as a clerk for the Fulton County Sheriff’s Office for 3 years, and prior to that, as a clerk for the Lake County Sheriff’s Office in Florida. She and her husband Jeff had also owned and operated the store, Down River Pines, in Grayling, Michigan for many years.

Dianne was born in Wauseon, Ohio on January 10, 1945, the daughter of Clyde and Florence (Hines) Raker. On October 9, 1965, she married Jeff Baxter, and he survives. She loved being a mother and grandmother, and enjoyed going to her grandchildren's activities. Dianne loved being outdoors and enjoying nature. She loved flowers, birds, mushrooming with Jeff, and fishing. She attended many Cat Fancier Association shows the past four years with her niece, and loved showing the Persian cats and making many friends.

Visitation for Dianne will be held from 10:00 A.M. until 11:00 A.M. on Friday, September 1, 2017, at the Grisier-Weigel Funeral Home in Delta. A service of remembrance will immediately follow at 11:00 A.M. with Pastor Donna Stutzman officiating. The family requests that memorial contributions be given to the American Cancer Society or the Dana Cancer Center.

Grisier-Weigel Funeral Home in Delta has been entrusted with arrangements.

Visitation: Friday, September 1st from 10 am to 11 am at the Grisier~Weigel Funeral Home in Delta

Memorial Service: Friday, September 1st at 11:00 am in the Funeral Home

To order memorial trees or send flowers to the family in memory of Dianne K. Baxter, please visit our flower store.