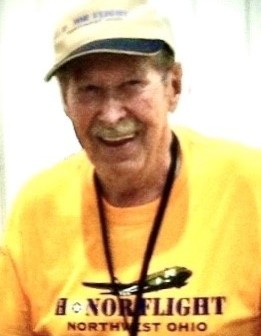 Don graduated from Carey High School, Class of 1948. He served with the U.S. Air Force during the Korean War as a Tail Gunner, flying 26 missions over North Korea.  After the war, he married Jayne Jolley.  They settled in Delta, Ohio and had five children while he worked as an aircraft mechanic for 25 years for Owens-Illinois (O-I).  Jayne preceded him in death in 1986 but Don is survived by their children– Howard (Debbie) Callahan, Donna (Rod) Saunders, Linda (Roque) Callahan-Brown, John (Linda) Callahan, and Susan (Scott) Holley—and 14 grandchildren and two great-grandchildren with whom he was blessed.

Don then married LaRena (Boulis) Wittenmyer in 1987, who survives him. Their long and happy marriage of 32 years expanded the family with LaRena’s children – Dennis Wittenmyer, Debra (Dave) Silveus, Dawn (John) Nye--and another 8 grandchildren and 18 great grandchildren.

In addition to his first wife, Don was predeceased by his parents, his brothers – Calvin, John (Jack) and Charles (Lee) Callahan.

Don was a devoted family man, a hardworking and meticulous mechanic and a commercial pilot who enjoyed flying and traveling. As a younger man, Don re-built an antique Piper Cub airplane he stored in a friend’s barn next to a grass landing strip.  When he came out of his bedroom wearing his white canvas shoes, his kids knew he was going flying and fought for the chance to accompany him to soar around the Fulton County countryside in the two-seater plane.  Don generally flew from the back seat with a son or daughter in the front; it was a unique experience both Don and his kids cherished.

While at O-I, Don had the benefit of traveling the world, visiting such places as Iceland, Venezuela, China, Japan, Hong Kong and many European countries. After retiring, he shared his travel bug with LaRena, and the two of them enjoyed memorable trips including Ireland, cruising Alaska and the Caribbean and multiple trips to Hawaii and other U.S. states.  For the past 27 years, Don enjoyed wintering with LaRena and their many friends at the Palm Shores mobile park in sunny Leesburg, Florida.

Closer to home, Don could be found in the stands or along the sidelines wherever his kids or grandkids were playing sports, from Delta to Clemson, watching countless games of football, basketball, baseball, volleyball, softball, soccer, golf and track meets—always with a proud smile on his face.

He was a member of the VFW in Swanton, K of P Lodge in Findlay, Delta American Legion, Henry County Scottish Rite in Napoleon, Arch Masons of Ohio (Carey Chapter) and Masons of Ohio (Upper Sandusky Chapter).

Don was a constant presence in the lives of his large, loving family and his many friends. He has left them with countless memories to cherish and will be dearly missed.

Visitation is on Saturday, January 25, 2020 from 9:30 -11:30 am at Griser-Weigel Funeral Home in Delta with funeral to follow at noon.  A light meal will be enjoyed at the American Legion Hall in Delta.

Those who wish to remember Don in a special way may make gifts in his memory to the Flag City Honor Flight, PO Box 885, Findlay, OH 45839.

To order memorial trees or send flowers to the family in memory of Donald M. Callahan, please visit our flower store.