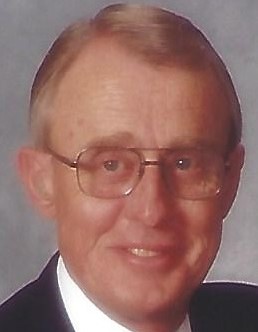 Donald Dale Hallett, age 83, of Lyons, died at home with his loving wife of 60 ½ years by his side on Wednesday, March 28, 2018.  He was born in Weston, Michigan on August 7, 1934, the third son of Donald and Mildred (Gillespie) Hallett. Dale lived his first few years in Weston and then moved with his family to his Grandmother’s farm south of Lyons. He attended Lyons High School and graduated with the class of 1952. He married Ruth Etter at the United Brethren Church in Adrian on August 23, 1957. They spent all but ten years when they lived in Delta, living in Lyons.

Dale worked at Oro Mfg. in Adrian before going into the Army. He served from July of 1955 until May of 1957, 11 months of which he spent in Germany. When he returned home he worked for the Metamora Elevator Co., then went to work at the Farmers State Bank of Lyons for 23 years, serving as Vice President when he left. Dale retired in 1997 from Newing-Hall Co. in Toledo.

Dale was a member of the Lyons Christian Church where he served as an Elder and Board Chairman. He was on the Lyons Volunteer Fire Department for over thirty five years and was Past Master of Royalton Union F & Am #434, Past Patron of Magnolia #87 OES. Dale was Royalton Township Clerk for 13 years and served on the Lyons Village Council. He was also a Charter Member of the Lyons Lions Club formed on October 28, 1958. He loved singing and sang with quartets, the last one being “The Friendship Singers” for over eighteen years.

Dale enjoyed building and flying R/C airplanes and racing R/C cars with his sons David and Richard in the basement or wherever they could find room to do it.
Dale will be sadly missed by his wife Ruth; daughter, Margie A. (Greg) Hallett-Langenderfer of Sylvania, OH; sons, David D. (Ellen) Hallett of Lyons and Richard A. (Sherri) of Delta, OH; brothers, Robert (Phyllis) Hallett of Sylvania and Lloyd (Marlene) of Severna Park, MD.; sister-in-law, Joan Hallett-Bauer of Bryan, OH; grandchildren, Ben and Cari Langenderfer, Don (Karly), Ross (Katelyn), Nick (Kelly), Zac (Kathryn) and Zoe Hallett; great-grandchildren, Cameren, Hailey, and Brayden; as well as many nieces and nephews.

He was preceded in death by his parents; brothers, Arden and Rex Hallett; father and mother-in-law, John (Alberta) Etter.

Memorial contributions may be made to the Lyons Christian Church or the Lyons Fire Department.

“Don’t be sad. Death is simply putting out a candle because morning has come.”

To order memorial trees or send flowers to the family in memory of Donald Dale Hallett, please visit our flower store.