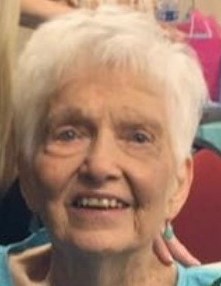 Dorothy A. Stasa, age 90, of Sylvania, Ohio, entered into eternal life, Thursdsay evening, May 17, 2018, at Ebeid Hospice in Sylvania.  She was born June 15, 1927 in Dandridge, Tennessee to Lula K. (Gass) and Carl S. Clark.  Dorothy was a 1945 graduate of Sand Creek High School.  On November 8, 1947, she married Charles Thomas Stasa. They lived 59 years outside of Lyons, Ohio. After Charles death in 2007, she moved to Mayberry Village in Sylvania.

Dorothy helped her late husband operate the family farm and raised six children.  In her later years, she worked and retired as an administrative assistant at Wacker Chemical Company in Adrian, Michigan.  A devout Catholic, Dorothy was a member of Holy Trinity Catholic Parish in Assumption.

Besides her beloved husband of 59 years, Charles, Dorothy was preceded in death by her parents; two sisters and one brother.

Memorial contributions may be made to Holy Trinity Church Building Fund, 2649 US 20, Swanton, OH 43558 or Promedica Ebeid Hospice.

To order memorial trees or send flowers to the family in memory of Dorothy A. Stasa, please visit our flower store.