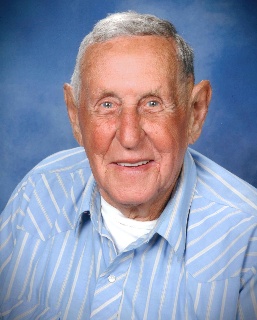 Edward Paul Witt, age 90, of Metamora, Ohio, passed away peacefully, surrounded by his loving family, Tuesday morning, September 20, 2016, at Ebeid Hospice in Sylvania . He was born July 2, 1926 in Adrian, Michigan to Francis Xavier and Elizabeth (Dickerson) Witt. Edward worked for the Jeep Corporation for 40 years, retiring in 1991.

A devout Catholic, Edward was a member of Holy Trinity Catholic Parish in Assumption. His daily routine was reading the newspaper and drinking coffee. He cut and sold wood and loved his cats. On a nice day, you would often find Edward sitting outdoors in his chair near the road greeting all the passersby's coming in and out of town with a friendly wave and a genuine smile. That will be greatly missed by many!

Edward was preceded in death by his parents; his daughter, Sue McLaughlin; sisters, Mary Miller and Helen Franklin; and brothers, James, Charles, Robert and Raymond Witt.

Family and friends may visit Friday, September 23rd, from 2 to 8 p.m. at the Weigel Funeral Home in Metamora (419.644.3601), where a Vigil service will be held at 7:00 p.m. Prayers will begin in the funeral home at 11:30 a.m. on Saturday, September 24th, followed by a Mass of Resurrection at 12:00 p.m. (Noon) at Holy Trinity Catholic Church in Assumption, with Fr. Michael Dandurand presiding. Interment will follow at St. Mary's Cemetery.

Memorial contributions may be made to Holy Trinity Church.

Visitation: Friday, September 23rd from 2 to 8 pm at the Weigel Funeral Home in Metamora

To order memorial trees or send flowers to the family in memory of Edward Paul Witt, please visit our flower store.