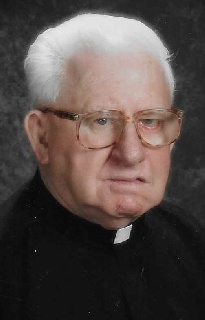 Father Snyder's body will lie in repose at Holy Trinity Catholic Church on Wednesday, January 4th from 2 until 6:15 pm

Father Snyder's most special day in his life was his ordination into the priesthood over 64 years ago on June 7, 1952. Since then, he devoted his life offering the Mass daily and administering the Sacraments.

On July 1, 1987, Father Snyder was appointed Pastor at St. Francis Church in Ashton, Nebraska and Our Lady of Mt. Carmel in Choynice, where he also worked with the Marriage Encounter program for 20 years, and served two years on the National Board.

In 1997, Father Snyder retired from active ministry and returned home where he was granted Senior status and in residence at Holy Trinity in Assumption. In his spare time, Father Snyder enjoyed making crafts and watching sports.

Father Snyder's body will be received at Holy Trinity Catholic Church in Assumption at 2:00 p.m. on Wednesday, January 4th and will lie in repose from 2:00 until 6:15 p.m. The Rosary will be recited at 6:30 p.m. His body will lie in repose from 9:00 a.m. until 10:15 a.m. in the church on Thursday, January 5th, where a Mass of Resurrection will be celebrated at 10:30 a.m. with the Most Reverend Daniel E. Thomas presiding. Interment will follow at St. Mary’s Cemetery in Assumption.

Memorial contributions in honor and memory of Father Snyder may be made to Holy Trinity Catholic Church or Holy Trinity School, 2649 US 20, Swanton, OH 43558.

Mass of Resurrection: Thursday, January 5th at 10:30 am at Holy Trinity Catholic Church

To order memorial trees or send flowers to the family in memory of Father Frederick N. Snyder, please visit our flower store.