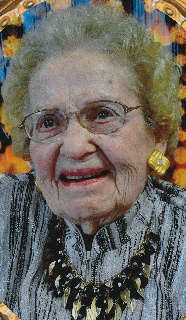 In 1941, they took over the family farm from John's grandparents on Old State Line Road. As a farmer's wife, Florence helped till the land and plant and harvest crops, while all along raising their two children, Delores and Doyle. Her husband, John, died of cancer in the fall of 1965 at the age of 58. Although she didn't farm after that, she supported her family as a seamstress and altered many garments for her friends and neighbors.

Florence was a 75-year member of the Order of the Eastern Star-Fulton Chapter and long time member of Trinity United Methodist Church.

Florence will be remembered as a hard worker, and will be missed by her daughter, Delores (Tom) Camp; son, Doyle (Linda) Drennan; 6 grandchildren; 8 great-grandchildren; siblings, Dorothy Bunde, Hallie Mitchell, Doris Grill, Reata Fox and Marvin Butz; as well as several niece and nephews.

Besides her husband, Florence was preceded in death by her parents; brothers, Harry Butz, Wayne Butz, Sr. and sister, Betty Simpson.

Family and friends may visit Thursday, September 14th from 4 to 8 p.m. at the Weigel Funeral Home in Swanton (419.826.2631), where an Eastern Star Service will begin at 7:30 p.m. Funeral services will be held Friday, September 15th at 11:00 a.m. in the funeral home with Pastor J.T. Bean officiating. Interment will follow at Sharples Cemetery.

Visitation: Thursday, September 14th from 4 to 8 pm at the Weigel Funeral Home in Swanton

Funeral Service: Friday, September 15th at 11:00 am in the Funeral Home

To order memorial trees or send flowers to the family in memory of Florence O. Drennan, please visit our flower store.