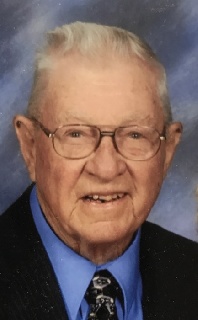 Francis J. Hoyt, age 95, of rural Swanton, passed away Monday morning, August 14, 2017, in his home. He had been a lifelong are farmer and had also worked at Auto-Lite for 25 years and the Jeep Corporation for 23 years.

Francis was born in Toledo, Ohio on June 9, 1922, the son of Francis and Bessie (Ernst) Hoyt. On September 10, 1949, he married Carolyn A. Hageman, and she preceded him in death in 2015. He was an active member of the Shiloh Christian Union Church. He was also an Army Veteran of WWII, an avid golfer, and a member of the Fulton County Horseshoe Club. After retiring, he and Carolyn traveled with the Roving Volunteers In Christ Service (RVICS) for nine years.

Visitation for Francis will be held from 3:00 P.M. until 8:00 P.M. on Friday, August 18, 2017, at the Grisier-Weigel Funeral Home, 400 W. Main St., Delta, Ohio. Funeral services will be held at 10:30 A.M. Saturday, at the Shiloh Christian Union Church, 2100 County Road 5, Delta, Ohio, with Pastor Chuck Whitmire, officiating. Interment will follow in the Heath Cemetery.

In lieu of flowers, the family requests that memorial contributions be given to Shiloh Christian Union Church or Community Health Professionals of Archbold.

Visitation: Friday, August 18th from 3 to 8 pm at the Grisier-Weigel Funeral Home in Delta

To order memorial trees or send flowers to the family in memory of Francis J. Hoyt, please visit our flower store.