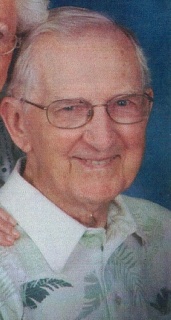 George Elmer Flack, age 91, lifelong resident of Metamora, Ohio, passed away peacefully Friday morning, September 9, 2016, at Sunset Retirement Village in Sylvania, with his daughters at his side. He was born May 25, 1925 in Doylestown, Pennsylvania, to the late George Brooks and Sara Myrtle (Michener) Flack. He excelled in football and track and field at Doylestown High School.

George was a United States Navy WWII Veteran serving from 1942 to 1946. His wife of 71 years, Marjorie Tredway was a United States Marine Corps WWII Women's Reserve Veteran, and on July 8, 1944, they were united in marriage. Marjorie preceded him in death on February 2nd of this year.

George started his career in Metamora with Flack’s Barber Shop for 12 years and transitioned into the insurance agency, George Flack Insurance Agency, for over 30 years. He was a member of the Metamora United Methodist Church, a Metamora Volunteer Fireman, and served as a Councilman and Mayor of Metamora. He was a longtime member of O.E.S. Fulton Chapter #67, Lyons and Wauseon Chapters of the Masonic Lodge F&AM serving as 5th District Deputy to the Ohio Grand Master. He was a member of Lyons VFW Post #7574 where he served as Past Commander, Fulton County United Veterans Association, and Fulton County Republican Party serving as a delegate chairman. At the time of his passing, George was member of the Berkey Congregational Christian Church.

As a Florida Snow Bird for over 25 years, he was the lead volunteer organizer for the Bradenton Boys & Girls Club for spring training games for the Pittsburg Pirates. He was also responsible for recruiting volunteers for the arts and crafts building at the Manatee County Fair, Palmetto, Florida. He also held season tickets to the University of Michigan sporting events for over 40 years. GO BLUE!

Besides his wife, Marjorie, George was preceded in death by his sisters, Edna Mae Ott and Catherine Ruff.

Visitation will be held Wednesday, September 14th from 2 to 8 p.m. at the Weigel Funeral Home in Metamora (419.644.3601), where a VFW Service will be held at 7:00 p.m. followed by a Masonic Service. Funeral services will be held Thursday, September 15th at 11:00 a.m. at the Berkey Congregational Christian Church with viewing from 10:00 a.m. to 11:00 a.m. Interment, with Military Rites, will follow at Amboy Township Cemetery.

In lieu of flowers, memorial contributions may be made to the VFW National Home for Children, 3573 S. Waverly Road, Eaton Rapids, MI 48827 or the Berkey Congregational Christian Church, 12036 Sylvania-Metamora Rd., Berkey, OH 43504.

Visitation: Wednesday, September 14th from 2 to 8 pm at the Weigel Funeral Home in Metamora

Funeral Service: Thursday, September 15th at 11:00 am at the Berkey Congregational Christian Church

To order memorial trees or send flowers to the family in memory of George E. Flack, please visit our flower store.