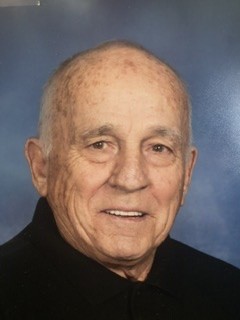 Gerald Herman Langenderfer, age 85, lifelong resident of Assumption, Ohio, passed away peacefully, Monday evening, May 4, 2020 with his family at his bedside. He was born on July 9, 1934 in Richfield Township to Herman and Ella (Marvin) Langenderfer. Gerald was a 1952 graduate of St. Mary's School in Assumption - He was proud to be a member of the first graduating class. Gerald served in the U.S. Army from 1957 to 1959, where he was trained to be a skilled electrician. This training, along with his natural ability to work with his hands, stayed with him throughout his life enabling him to help family and friends with any project he could contribute to.

Gerald met the love of his life, Elsie VanBelle, at a Toledo Council of Catholic Youth dance. A few months later, on September 17, 1960, they married at St. Joseph Church in Erie, Michigan. They lived in Metamora, Ohio for a short time, and later built a home in Assumption where they raised their three children, Jeff, Brian and Jennice.

Gerald worked for Shindler Haughton and Dover Elevator as an elevator repair technician, retiring in 1994. After retirement, he and Elsie enjoyed vacationing, gardening and cheering on their grandchildren during sporting events and other activities. He always felt that family was most important in his life and Gerald showed his belief of having a strong family connection by being a devoted husband, father, and grandfather.  He and Elsie also enjoyed time together playing on many bowling leagues. Gerald was an excellent bowler as well, with a “300” game being one of his many accomplishments.

Gerald was a member of Holy Trinity Catholic Parish and was an active member of the Catholic War Veterans Post #306 of Assumption, St. Mary’s Credit Union, Wauseon Elks and Knights of Columbus.

Besides his beloved wife, Elsie, Gerald was preceded in death by his parents, and his sister, Mary Alice Megyesi.

Thank you to Promedica Hospice and Charter Senior Living for the exceptional care provided to Dad over the past year.

Due to the current restrictions, visitation at Weigel Funeral Home in Metamora and Mass of Christian Burial at Holy Trinity Catholic Church in Assumption will be private.  Father Michael Dandurand will preside. Interment will take place at St. Mary's Cemetery.

To order memorial trees or send flowers to the family in memory of Gerald Herman Langenderfer, please visit our flower store.