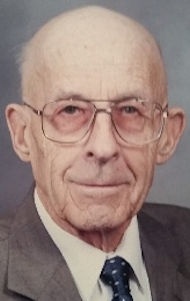 James "Ray" Carroll, age 93, of Swanton, Ohio, entered into eternal rest, Friday afternoon, June 16, 2017, surrounded by his family, at Swanton Health Care and Retirement Center assisted living facility. He was born to Henry Thomas and Bessie Renee (Snider) Carroll on June 4, 1924, in Spencer Twp. Ray married Norma Veres on June 21, 1958; she preceded him in death on October 28, 1986. He worked as a farmer and as a Lucas County Sanitary Engineer; retiring in 1989.

Ray loved to go to biking in the park and spending time with his grandchildren. He was an active member of Holy Trinity Catholic Church. He will be greatly missed by his friends and family.

He is preceded in death by his parents; wife, Norma; brothers, Charles and Nick Carroll; and son-in-law, James Arnold.

Family and friends may visit Monday, June 19th from 2 to 8 p.m. at the Weigel Funeral Home in Swanton, where a Vigil service will be held at 7:00 p.m. Prayers will begin in the funeral home at 10:20 a.m. on Tuesday, June 20th, followed by a Mass of Resurrection at 11:00 a.m. at Holy Trinity (Immaculate Conception) Catholic Church at Marygrove, 1750 N. Raab Road, with Fr. Michael Dandurand presiding. Interment will follow at Marygrove Cemetery.

Memorial contributions may be made to Great Lakes Hospice or Holy Trinity Catholic Church.

The family would like to give a special thanks to the staff at Swanton Health Care and Retirement Center and Great Lakes Hospice for the loving and compassionate care they gave to Ray.

Visitation: Monday, June 19th from 2 to 8 pm at the Weigel Funeral Home in Swanton

Mass of Resurrection: Tuesday, June 20th at 11:00 am at Immaculate Conception Catholic Church-Marygrove

To order memorial trees or send flowers to the family in memory of James "Ray" Carroll, please visit our flower store.