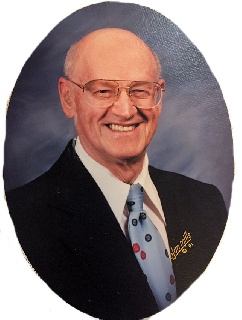 James L. Lulfs of Swanton, Ohio, passed away peacefully with his family at his side, Friday morning, May 5, 2017, at the Defiance Inpatient Hospice Center. James worked for AP Parts for 30 years. He was also a proud veteran serving in the United States Air Force.

Never one to sit around, James was always doing something. He had a home farm where he raised chickens, pigs and rabbits. He also ran Swanton Pheasant Farm, where he raised pheasants for the Sportsman Club. He was always telling his kids -"don't make pets out of them". When things got a little slow at AP Parts, he started Jim's Home Maintenance Service. James had a real knack for woodworking and crafts. He could build or fix practically anything wood related. He even taught himself how to do instarsia, which is a form of wood inlaying.

Jim and his wife, Charlotte enjoyed making crafts together and traveling around to different craft shows. They met so many people at these shows and always came home with a new groups of friends to stay in contact with. Jim and Charlotte were members of Trinity United Methodist Church in Swanton. They really enjoyed the fellowship time during and after the service, especially the cookies! James just wanted to be remembered as the nice guy.

James married Charlotte in 1978 and they enjoyed 39 years together. She preceded him in death along with his sisters, Rosie and Alice and brothers, Harry and Don.

A memorial service will be held Saturday, May 13th at 11:00 a.m. at Trinity United Methodist Church, 210 N. Main Street in Swanton, with Pastor J.T. Bean officiating.

In lieu of flowers, memorial contributions may be made to Trinity United Methodist Church.

Memorial Service: Saturday, May 13th at 11:00 am at Trinity United Methodist Church

To order memorial trees or send flowers to the family in memory of James Lloyd Lulfs, please visit our flower store.