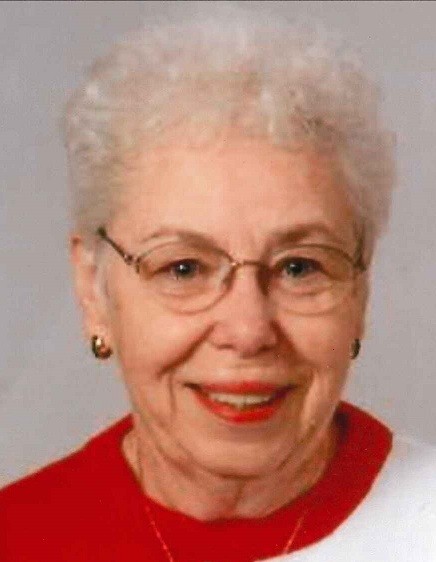 Lenora Edith (Peebles) Borck, age 85, of Swanton, Ohio passed away peacefully, Monday evening, April 30, 2018. She was born April 7, 1933 in Lyons, Ohio, and was the oldest girl of ten children, of Clarissa Gwendolyn (Pickles) and Ray Randall Peebles. She was a 1951 graduate of Lyons High School. On, June 16, 1951 she married Kenneth W Borck.

She worked for many years as a homemaker, then a bookkeeper for several companies until she started her own practice where she met and made several friends doing their books and taxes for many years. She was the most passionate person, whether it be in work, politics, love, or family, you always knew where she stood on any matter. She loved the color red, red cardinals, and red roses. Her favorite things in life were reading, cooking, family gatherings and the Christmas holiday.

After retirement, she enjoyed traveling and spoiling her grandchildren and great-grandchildren.  She was a member of the Lyons Christian Church, and was very active in the community.  Lenora served as a secretary of the Swanton Business and Professional Woman's Group, was past president of the Swanton Elks Ladies Auxiliary, served as state treasurer for the Homemakers Group, and member of the Fulton County Homemakers Demonstration Club.  In her spare time Lenora enjoyed bowling, cooking, baking, sewing, needlepoint, and knitting.

A memorial service celebrating Lenora’s life will be held Saturday May 5th at 1:00 pm at the Lyons Christian Church, 138 E Morenci St in Lyons, OH 43533, with Pastor George Shaver officiating.

Memorial contributions may be made to Lyons Christian Church.
Arrangements by Weigel Funeral Home (419.826.2631).

To order memorial trees or send flowers to the family in memory of Lenora E. Borck, please visit our flower store.