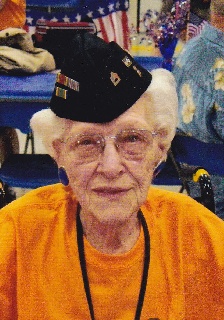 Marian G. Elfring, age 94, of Ai, Ohio, passed away Monday, July 17, 2017 at The Toledo Hospital, following a recent fall. She was born April 19, 1923 in Toledo, Ohio to Alvin and Ina (Fetterman) Gilbert. She graduated from Libbey High School and proudly enlisted in the U.S. Navy Waves serving during WWII from 1944-1946. Marian married Henry "Tony" Elfring on November 10, 1954.

Marian tended bar and was a waitress at several restaurant establishments in Toledo and retired as a restaurant manager at Valleywood Golf Club in Swanton. She was a member of Swanton American Legion Post #479 and Lake Erie Waves Unit #128.

Marian was a world class knitter, crocheter and quilter. She loved working crossword and jigsaw puzzles.

Marian was preceded in death by her husband of 58 years, Tony and her parents.

Family and friends may visit Friday, July 21st from 4 to 8 p.m. at the Weigel Funeral Home in Swanton. Funeral services will be held Saturday, July 22nd at 11:00 a.m. in the funeral home, with Rev. Donna Stutzman officiating. Interment, with Military Rites, will follow at Ai Cemetery.

Visitation: Friday, July 21st from 4 to 8 pm at the Weigel Funeral Home in Swanton

Funeral Services: Saturday, July 22nd at 11:00 am in the Funeral Home

To order memorial trees or send flowers to the family in memory of Marian G. Elfring, please visit our flower store.