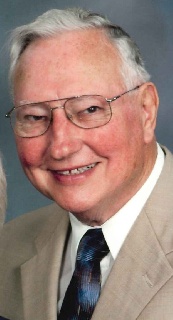 Marvin W. Geiser, age 86, of Maumee, Ohio, passed away Tuesday, January 24, 2017 at Gaslight Village in Adrian, Michigan, under care of Hospice of Lenawee. He was born September 19, 1930 in Toledo, Ohio to Marvin M. and Sarah Anna (Spengler) Geiser. Marvin was a graduate of Holland High School, and following graduation, he enlisted in the United States Army, where he served in the 2nd Armored Division during the Korean War. On October 16, 1954, he married his beloved wife, Alice Mae Parker.

Marvin worked 35 years at Champion Spark Plug. He was a member of Maumee United Methodist Church. He and Alice lived in Florida for 20 years, and enjoyed making woodcrafts and landscaping. Marvin was also an avid OSU fan.

Marvin was preceded in death by his parents; sister Luetta Hardy; and brothers, Allen, Charles, Hubert and Dean Geiser.

Visitation will be held Sunday, January 29th from 2 to 8 p.m. at the Weigel Funeral Home, 204 Chestnut St. in Swanton (419.826.2631). Funeral services will be held Monday, January 30th at 11:00 a.m. in the funeral home with Pastor Joanie Schilling officiating. Interment, with Military Rites, will follow at Swanton Cemetery.

Memorial contributions may be made to Hospice of Lenawee or Maumee United Methodist Church.

Visitation: Sunday, January 29th from 2 to 8 pm at the Weigel Funeral Home in Swanton

Funeral Service: Monday, January 30th at 11:00 am in the Funeral Home

To order memorial trees or send flowers to the family in memory of Marvin W. Geiser, please visit our flower store.