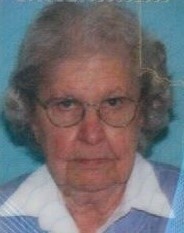 Mary Lou worked as a telephone operator for the United Telephone Company where she met Hugh. She loved baking bread and spending time with her family and friends.

Besides her husband, Hugh, Mary Lou was preceded in death by her parents; son, Ross A. Sanderson; and son-in-law, Loyd Earle.

Family and friends may visit Thursday, April 7th from 2 to 8 p.m. at the Weigel Funeral Home in Metamora (419.644.3601). Funeral services will be held Friday, April 8th at 11:00 a.m. in the funeral home, with Rev. Donna Stutzman officiating. Interment will follow at Amboy Township Cemetery.

In lieu of flowers, memorial contributions may be made to the Metamora Fire & Rescue.

Visitation: Thursday, April 7th from 2 to 8 pm at the Weigel Funeral Home in Swanton

Funeral Service: Friday, April 8th at 11:00 am in the Funeral Home

To order memorial trees or send flowers to the family in memory of Mary Lou Sanderson, please visit our flower store.