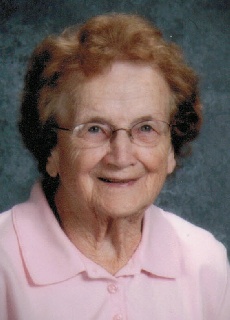 She was born on September 29, 1923 to Anthony and Caroline (Gerten) Lumbrezer in Richfield Center, Ohio. After 37 years of marriage, Mary became the widow of Bert, who preceded her in death in 1981.

For over 30 years, Mary worked for Stubnitz Green/Hoover Ball Bearing, Adrian, Michigan. She then became the Assistant Cook at Holy Trinity School, Swanton, Ohio for 28 years. She was a member of Holy Trinity Catholic Parish.

Mary loved spending time with her family. Those who came to visit were always offered a meal. It was like the miracle of the loaves and fishes, no matter how many unexpected guests, there was a feast spread out before them.

The family will receive friends at the Weigel Funeral Home in Metamora, Ohio from 2 to 8 p.m. on Sunday, April 9th, where a Scripture service will be held at 7:00 p.m. Prayers will begin at 9:30 a.m. in the funeral home on Monday, April 10th and follow with a Mass of Resurrection at 10:00 a.m. at Holy Trinity Catholic Church in Assumption, with Fr. Michael Dandurand presiding. Interment will follow at St. Mary's Cemetery.

The family suggests memorials to Holy Trinity School or Parish, or The American Diabetes Association.

Visitation: Sunday, April 9th from 2 to 8 pm at the Weigel Funeral Home in Metamora

Mass of Resurrection: Monday, April 10th at 10:00 am at Holy Trinity Catholic Church in Assumption

To order memorial trees or send flowers to the family in memory of Mary L. Ward, please visit our flower store.