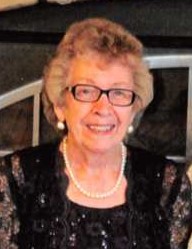 Phyllis A. Fitch, age 81, life-long resident of Swanton, Ohio, passed away peacefully, with her family at her bedside, Sunday morning, September 8, 2019.  She was born May 5, 1938 in Swanton to Milton and Clara (Leininger) Culler.  Phyllis was a 1956 graduate of Swanton High School.  She met Raymond Steven Fitch of Delta at a movie theatre in Swanton, and on May 2, 1959, they were married.  He preceded her in death on December 17, 2011. Also known as Mrs. Fitch by her students, she was a teacher's aide at Park Elementary in Swanton for 27 years, retiring in July of 1999.

Phyllis loved being outside tending to her yard and gardening and traveling throughout the United States on family vacations.  She enjoyed playing Bingo, embroidery,  pottery, puzzles and visiting the casinos.  Phyllis was an active member of the Swanton American Legion Ladies Auxiliary, where she liked to play Euchre. Most of all, she enjoyed spending time with her family and watching her grandchildren grow up.  Phyllis was the rock that held her family together and will be remembered for her wonderful sense of humor and infectious smile.

Besides her husband, Raymond, Phyllis was preceded in death by her parents; and brothers, John and Richard Culler.

Family and friends may visit Wednesday, September 11 from 3 to 8 p.m. at the Weigel Funeral Home in Swanton. Services will be held Thursday, September 12th at 11:00 a.m. in the funeral home with Rev. Donna Stutzman officiating. Interment will follow at Swanton Cemetery.

The family wishes to thank many special people in Phyllis' life, especially those who helped her over this past year.

In lieu of flowers, memorial contributions may be made to Hospice of Northwest Ohio or Swanton American Legion Post #479.

To order memorial trees or send flowers to the family in memory of Phyllis A. Fitch, please visit our flower store.