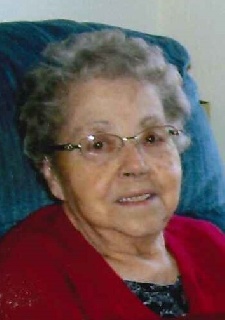 Rita B. Zielinski, affectionately known as Grandma Rita, age 93, of Delta, Ohio, entered into eternal rest Friday afternoon, January 12, 2018 at the Fulton Manor in Wauseon. She was born July 6, 1924 in Toledo, Ohio to the late Lottie (Polcyn) and Stanley Jakubowski. Rita was a graduate of Libby High School and on April 23, 1949 she married Theodore Zielinski. Rita helped her husband work and manage the family farm. Ted preceded her in death on September 27, 2006.

Rita was a devout Catholic and member of St. Richard Catholic Parish. She loved cooking and baking and no one ever left her house hungry. She adored her grandchildren and great-grandchildren, and loved spoiling them too.

Besides her husband Ted, Rita was preceded in death by her parents; daughter, Marsha Wines; twin sister, Beatrice; sister, Irene and brother, Al.

Visitation will be held Monday, January 15th from 2 to 8 p.m. at the Weigel Funeral Home, 204 Chestnut St. in Swanton, where the Rosary will be recited at 7:00 p.m. A Mass of Resurrection will be celebrated Tuesday, January 16th at 11:00 a.m. at St. Richard Catholic Church, 333 Brookside Dr. in Swanton, with Fr. Adam Hertzfeld presiding. Interment will follow at St. Richard's Cemetery.

Memorial contributions may be made to the Fulton Manor-Activities Fund or to a charity of the donor's choice.

Visitation: Monday, January 15th from 2 to 8 pm at the Weigel Funeral Home in Swanton

Mass of Resurrection: Tuesday, January 16th at 11:00 am at St. Richard Catholic Church

To order memorial trees or send flowers to the family in memory of Rita Zielinski, please visit our flower store.