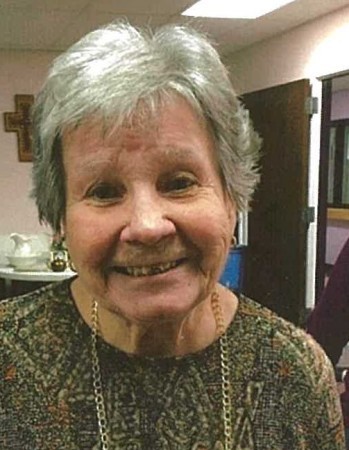 Rosemary Smith, affectionately known as Rosie, age 89, of Swanton, Ohio, passed away peacefully Friday afternoon, February 22, 2019 at Swanton Health Care and Retirement Center  surrounded by her three loving children.  She was born November 15, 1929 in Detroit, Michigan to Leo and Mary Ann (Snyder) Schneider.  On June 24, 1950, she married Howard E. Smith.  They were married for 57 years until he passed away in 2007.

Rosie worked at Clevite-Harris/Tenneco in Napoleon, retiring in 1991 after 31 years of service with the company.

Rosie was a faithful and devoted member of St. Richard Catholic Parish and its Altar-Rosary Society. She loved spending time in her huge flower garden where many beautiful iris, daylilies and peonies grew because of her tender loving care.  She resided at Swanton Health Care for the past 5 1/2 years where everyone seemed to know her because of her outgoing and genuine personality.  Staff and residents said she always had a warm smile and a cheerful greeting for all.

Besides her husband, Howard, Rosie was preceded in death by her parents; three sisters, one brother, and infant daughter, Cathy Louise.

Family and friends may visit Monday, February 25th from 2 to 7 p.m. at the Weigel Funeral Home in Swanton, where the Rosary will be recited at 7:00 p.m.  A Mass of Resurrection will be celebrated Tuesday, February 26th at 11:00 a.m. at St. Richard Catholic Church in Swanton, with visitation one hour prior to the Mass.  Interment will take place in St. Richard's Memorial Garden at a later date.

To order memorial trees or send flowers to the family in memory of Rosemary "Rosie" Smith, please visit our flower store.