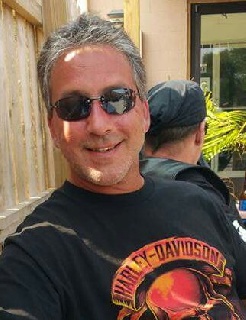 Timothy William Hamlet, age 46, of Swanton, Ohio, died unexpectedly, Friday, September 29, 2017 at St. Luke's Hospital Emergency Room. He was born December 4, 1970 in Framingham, Massachusetts to Edwin and Susan (Kennedy) Hamlet. Tim was a 1988 graduate of Swanton High School and Penta County Vocational School. He took great pride at his job at Swanton Welding where he worked as a mechanical fabrication leader.

Tim loved driving his 1997 Pontiac Trans Am and showing it off at car shows. He also loved riding his Harley, collecting record albums and dragons, playing darts and pool, and he was an avid Ohio State Buckeyes Fan.

Memorial Contributions may be made to Swanton American Legion Service Dog Project.

Visitation: Tuesday, October 3rd from 2 to 8 pm at the Weigel Funeral Home in Swanton

Mass of Resurrection: Wednesday, October 4th at 11:00 am at St. Richard Catholic Church

To order memorial trees or send flowers to the family in memory of Timothy William Hamlet, please visit our flower store.