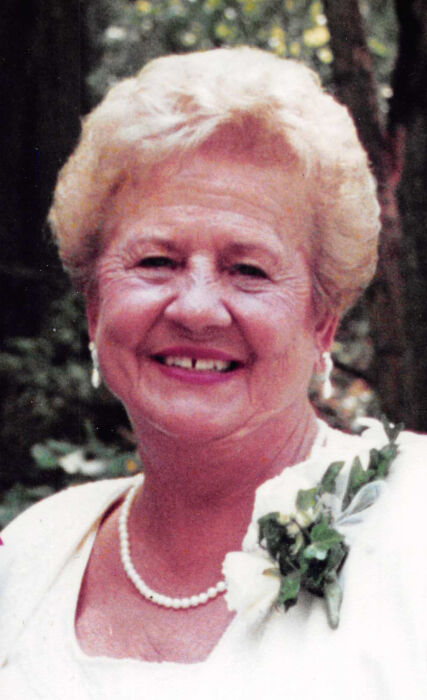 Velma R. Hallett, age 93, lifelong resident of Swanton, Ohio, passed away peacefully, Thursday morning, April 22, 2021 at the Rosary Care Center in Sylvania. Velma was born March 12, 1928 to George and Rosella Degenfelder. Velma attended Swanton High School and graduated with the class of 1946. Velma cherished the time she spent at the many reunions that followed. Velma met her husband Terry at Swanton High School. They married on August 26,1950. Velma was a Navy wife, staying in a variety of locations while Terry served. Terry and Velma settled down in Swanton, Ohio and raised 3 children, each one adopted. Velma and Terry were staunch advocates and proponents for adoption and were featured in the Catholic Chronicle following Kelly's adoption. Velma also leaves 5 grandchildren and 6 great grandchildren who she loved and adored. Velma was always in attendance to witness the accomplishments of her children, grand and great grandchildren throughout her long life. Velma was tirelessly committed and extremely devoted to her family. She had a very special place in her heart for her daughter Kathleen's furry children, who were always allowed to run the back 40, jump in the pond and sit on the furniture, though not on the same day.

Velma was also active at St. Richard's Parish in Swanton, Ohio, especially as a young mother always present to assist in any fashion. Velma's faith in Jesus Christ was her guiding light. She prayed to the Virgin Mary often, and seldom missed the May crowning. She enjoyed bowling on Friday nights and playing golf at Valleywood Golf Club in Swanton, where she and Terry were active members for many years. Throughout her life, Velma traveled to different destinations with her husband Terry always enjoying the trip. Annual family summer vacations along Black Lake in Cheboygan County, Michigan, and spring trips to Naples, Florida, where Terry and Velma eventually purchased a winter retreat. Velma and Terry created so many lasting memories in Michigan and Florida for their children, and now grand and great grandchildren. Fishing on the beaches of the Gulf of Mexico, off the pier on the bay, or 10 miles out to sea; singing and roasting marshmallows by a campfire at Black Lake, water skiing, and so many more. Velma had a very special group of friends in Naples. Many a beautiful Southwest Florida evening was spent, relaxing on the back patio by the bay, cocktail in hand, waiting for Terry to cook the catch of the day, Treasured moments.

Velma's spirited personality was ever present. Let's not forget the annual Christmas Eve visits from "Santa Claus". Velma made sure to create an atmosphere of great anticipation, as all the kids eagerly awaited the Big Guy's arrival, bells and all !! Friends and family will recall her lighthearted nature and love for laughter. Velma was known to be a little mischievous in order to create some harmless fun. Bridge was Velma's passion. Whether at Valleywood, Wings Station or at the homes of Lucille, Gretchen or Aletha, a weekly hand was seldom missed (RIP Jo Sloan). So many dear friends were known to fill in when needed; Mary B., Tom K. (RIP), Donna G., Jill H., Susan S. and others. Velma's dear niece, Sue Stough also played regularly and picked her up for her card games when she was unable to drive.

Velma deeply cherished and loved her family and friends. Up until shortly before her passing, she never missed a nightly call (following Wheel of Fortune and Jeopardy, of course) to her younger sister, Doris (RIP) and her dear friend, Donna Gearig, ending each and every call with, "I love you”. Velma had an endless supply of love in her heart and that is what will be missed most by those she leaves behind.

Velma's family wishes to thank those who made it possible for her to stay in her home over the past year; Dora, Denise and others at Passionate Care, Archbold, Ohio; dear friend, Susan Stultz, always ready for a long day of cards; and our dear friend, Jill Hart, who made many personal sacrifices to enable the family to keep Velma home during the pandemic. Each provided Velma with tender, loving care, for which the family will be eternally grateful.

Visitation will be from 4:00 to 8:00 p.m., Sunday, April 25th at the Weigel Funeral Home in Swanton, where a Prayer Vigil Service will be take place at 7:00 p.m. A Mass of Christian Burial will be held Monday, April 26th at 11:00 a.m. at St. Richard Catholic Church in Swanton, with visitation one hour prior at the church. Fr. Eric Culler will preside. Interment will follow at St. Richard Cemetery.

You picked us off the ground, took us to your nest, and fixed our little wings. We'll always think of you, when we hear the birds sing. They'll sing a beautiful song, reminding us of your comforting voice. We'll just look to the sky, smile and rejoice.

To order memorial trees or send flowers to the family in memory of Velma R. Hallett, please visit our flower store.