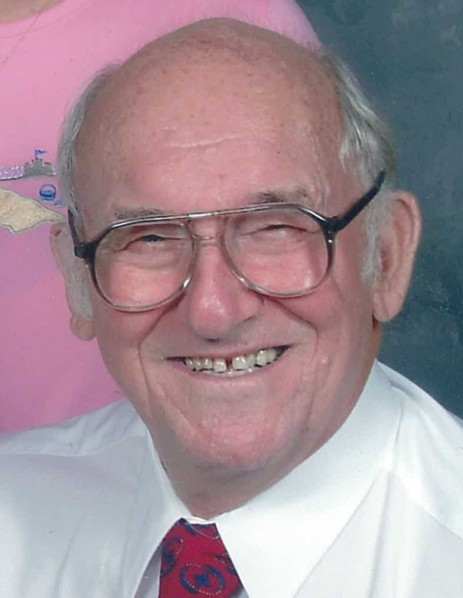 William "Bill" B. Iott, age 95, of Swanton, Ohio, entered into eternal life, Thursday morning, November 29, 2018 at St. Luke's Hospital.  He was born August 21, 1923 in Petersburg, Michigan to Howard and Catherine (Wernert) Iott.  Bill was a U.S. Army WWII veteran, and shortly after returning from the service, married his beloved wife, Marian Hassen on October 12, 1946.

Bill retired from Jeep and was a lifelong farmer.  A devout Catholic, Bill attended Mass and prayed the rosary daily.  He attended St. Richard Catholic Church before becoming a member of Holy Trinity Catholic Parish in Assumption.  Bill will be remembered as a very generous person.  He was an avid gardener and would donate a large portion of his harvest to the Cherry Street Mission to help feed the poor.  He and Marian enjoyed swimming almost daily at the St. James Club, was an avid reader and he loved playing cards.  He recently had the opportunity to go on an Honor Flight with his daughter, Natalie, accompanying him as his chaperone.

Bill was preceded in death by his parents; daughter, Sylvia A. Storeholder-Bernia; and his siblings, Gerald, Bernice, Kenneth and Earl.

Family and friends may visit Sunday, December 2nd from 2 to 8 p.m. at the Weigel Funeral Home in Swanton, where the Rosary will be recited at 7:30 p.m.  Visitation will continue Monday, December 3rd from 10 a.m. to 11 a.m. at Immaculate Conception Catholic Church at Marygrove, 1750 N. Raab Road, Swanton, Ohio where a Mass of Resurrection will begin at 11:00 a.m. Interment with Military Rites will follow at Marygrove Cemetery.

Memorial contributions may be made to Holy Trinity Church.

To order memorial trees or send flowers to the family in memory of William B. Iott, please visit our flower store.